The Path tool provides an additional method of adding movement to objects, by defining points through which the object will pass.

To draw a path, select an object and click the path tool button. You may also press and hold down the p key. You can now insert new points by right-clicking in the edit area and select for instance Add curve point.

Whenever an object has a path, this will show in the Timeline. Clicking the small arrow next to the object will show a timeline view of the path.

The vertical lines in the timeline view shows where the path points are positioned. If you click on a path point in the edit area, it will be selected and you can then modify its position and angle.

When the mouse pointer is a move pointer (

) you can drag downward to create a pause on a path point. The empty space corresponds to the time the object is not moving and instead pausing on the path point.

Right-click on the path in the timeline view to open the path timeline context menu.

Adjusts the time intervals between path points based on the distance between them. This has the effect of maintaining a constant speed throughout the path movement. This will include the pauses on path points.

Opens a dialog in which to enter the time in between each path point - the same time will be used regardless of the distance between the points.

Opens a dialog where you may enter the amount of time to pause on each of the points in the path.

Delete any and all pauses on path points.

Right-click the edit area to bring up the path context menu. 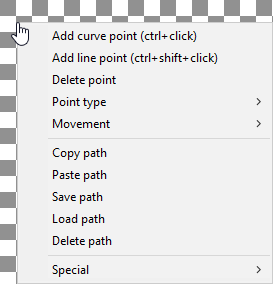 You may also use the corresponding buttons in the Path movement dialog.
Lines

Make the point a curve point.

If unchecked, allows for independent control of the curve entering the point as well as the exiting curve.

Maintains a constant speed during the interval in between this point and the next.

Increases speed during the interval.

Decreases speed during the interval.

Copies the path to the clipboard.

Note: This will overwrite an existing path on the object.

Save the path to a file on disk. The file extension for a saved path is .disepath.

Load a path from disk.

Retains the points but puts them all at the starting point.

Retains the points but puts them in a line from the start to the end point.

Switches position of the points so that the last point is the first and so on.

Copy path to all objects

Copies the current path to all objects in the scene.

Note: This will overwrite any existing paths.

The Path settings tab in the top menu holds the properties for a selected point in a path. For instance, further specify for how long the object's path should pause on the selected point.

Make the point a curve point.

If unchecked, allows for independent control of the curve entering the point as well as the exiting curve.

The exact time on the timeline the point will be passed.

The exact time on the timeline to pause on the point.

Specify the position in space (X,Y,Z) of the point.

The object, when passing, will have to rotate to angle up.
The angle is defined in degrees for X, Y and Z.

Note: You may enter a value of over 360, in which case the object has to rotate several times to angle up!

Maintains a constant speed during the interval in between this point and the next.

Increases speed during the interval.

Decreases speed during the interval.