The timeline lets you edit the timing of objects visibility and gives you a good overview of their placement as well. The timeline view is located at the bottom of the main screen under the tab named Timeline.

If it's not shown, select View > Windows > Timeline in the top menu 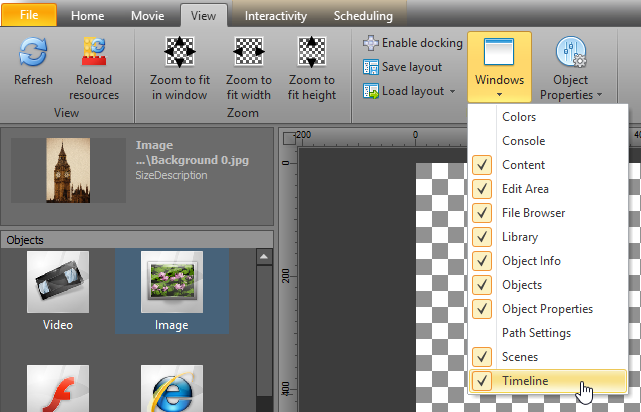 The objects in your scene are listed to the left, and their timing values are represented as colored bars to the right. If you want more space for the names of the objects, there is a small invisible vertical band between the name part and the timeline. The mouse pointer will change when it is over that area. Just click and drag the width of the object names part to the preferred size.

The timeline can be used to select objects. Just click in the timeline on an object and it will be selected. The color of the timeline is a bit darker on the objects that are selected, and the objects are highlighted with "handles" in the edit area. Multiple objects can be selected at the same time by holding down the CTRL key (for individual objects) or SHIFT key (for ranges of objects) while clicking.

Changing the order of objects

Change what objects lies on top or back by moving them up / down in the timeline. To your help are two buttons to the left of the zoom slider, that will move the selected object(s).

Changing the visibility of objects

By clicking on the Eye to the right of the objects name, can you temporarily make the object invisible. This is useful if you have a lot of objects on the editing area and need to focus on only one or a few. Then you can easily "hide" the ones that are visually unimportant at the moment.

Changing the timing of objects

The bar of the selected object can be dragged and sized to make the object appear and disappear at desired times. If you click and drag on a timeline, you will move the object in time. Times in DISE can be specified up to millisecond level.

The start and end time will be displayed in the status bar at the bottom of the main window. The time is shown in a format (MM.SS:msec) with minutes, seconds and milliseconds. You can select several objects at the same time by holding down the CTRL key when selecting the objects. When you change timing in the timeline, all the timing of the objects that are selected will be changed at the same time.

Changing the duration of objects

If you hold the mouse pointer close to the beginning or end of a timeline, the cursor will change. If you click and drag, just the start or end time of the object will change, and the objects duration will be longer or shorter.

Note: If the object is time locked, which is indicated by a jagged line, its duration can't be manually changed.

The timescale can be changed with the slider at the upper-left corner of the timeline.

Sometimes, the timing of an object can be locked in different ways. In that case, the timing can not be changed in the timeline until timing is unlocked. Time-lock can be edited in the Object Properties menu. If an objects start- or stop time is locked, it is indicated with a "jagged" edge in the timeline.

Some objects can contain other objects, transitions, with timing that is local to that object. Such are indicated with a small black triangle to the left of the object name. If you click that triangle, the object will be expanded to show the included times, and let you edit them.