Content in DISE can come from many different sources with a length that is dynamic and not known at design time. Time locking is a feature that works well in a dynamic environment, allowing you to rather than explicitly setting individual times of objects, set objects' start or stop times relative to some other object. At first glance, this might seem like a design facility, but you will soon find it is very powerful and useful in designing truly dynamic content. If you have worked with objects on the timeline you will have come upon time locks - by default, the stop time of objects are locked to the scene end. But can be unlocked in the Object Properties menu.

You want to show some images and videos, one after the other, in a scene. The videos come from an external source and can be any length. Of course, if there is no video, you don't want there to be a pause. But instead want the images to show.

You can then use time locking to lock the objects in sequence. 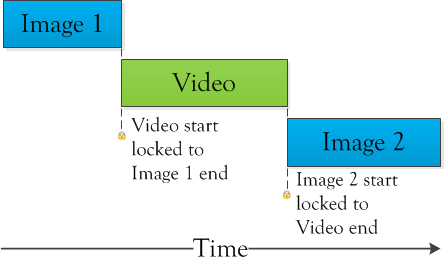 When an object is time locked, it is shown on the timeline view by a jagged line at the time-locked end of the object.

Time locks are in effect in design mode which you can see by changing a time locked object's start or stop times and notice that its dependent objects' times change accordingly on the timeline. When an object is time locked, its duration cannot be manually changed.

Time locks are setup in the Object Properties. 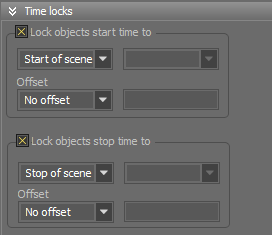 Specifies that the object's time should be locked to the start of the scene.

Specifies that the object's time should be locked to the stop of the scene.

Note: By default, an object will get a name equal to their type, such as "Square". We recommend you to name your objects for organization.

The lock can have a time offset, meaning that it will be locked to a position some time after.

Specifies a percentage into the object's lifespan to lock to. Entering an offset of 25% from the start time on a 20-second object will thus lock to 5 seconds in. Similarly, a stop time with a relative offset is before the stop time.

Note: There are some circumstances where time locking logically does not work, for example locking an object start to a time after its own end or if you lock objects to each other in a “circle”.

To remove all time locks on an object, select the object, then select Lock > Time > Unlock time of selected objects.

It is possible for an object to have zero length because of time locking. This is not a problem per se, but if you are experiencing that objects disappear you may want to investigate the object's time locks. If you have at least two objects, that are locked to each others end times. Then you will have a circular lock. DISE will detect and warn about this. It is recommended that no circular locks exist in your DISE Movie as it can lead to unwanted behavior.

Time locks are the first thing to check when troubleshooting DISE NoBorders content. To save resources, DISE will not load content that will not be shown on the Player. It is possible that an object that determine the length of the scene is not present on a player - the scene length of that player is therefore unknown.