Sound during playback can come from different sources: Sound Object, Video Object or even from a Web page.

By default the sound of playing video is on, but you can mute it if you want. It is also possible to modify the built-in music player to mute or fade out the background music whilst the video is playing.

When using the Web page object all sound played by Flash files or other ActiveX components will be heard. But since web pages are loaded in the background the sound will be heard all the time even when the playback displays another scene without any web pages. The conclusion is that is it not recommended to show web pages that contain audio.

For advanced sound setups where the need to control multiple outputs is required, DISE lets you define "virtual" audio output devices. The definition is done in DISE Composer by simply specifying a name, such as "Ceiling speakers", during content design. In the individual settings for a video object or sound object, you can control on what virtual device the sound should be played. 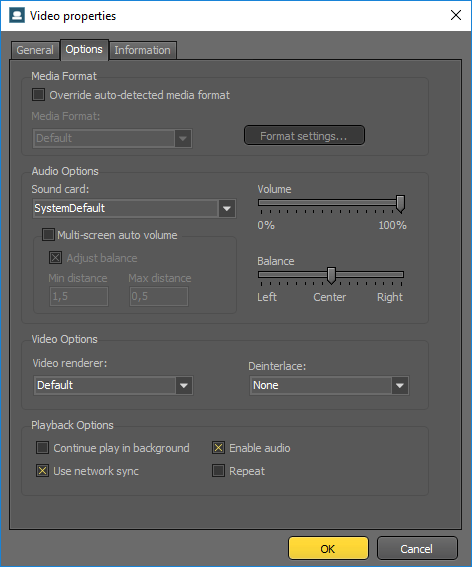 On the players, the "real" audio output device is specified and tied to the virtual device by name.

DISE CX Portal has easy to access and use built in sound control for all screens connected to it.

For more advanced setups, DISE Parser also has the ability to control volume via its Volume modifier.

By default in a DISE NoBorders system the volume of sound-generating objects will be adjusted to match how far away it is, giving the impression of sound moving along with the object.

Note: Having several players with audio in close proximity will always sound off due to sound interference.

It is important to think about the people that work in a store or at the location where a player is placed. Repetitive sound can be very annoying and most often will be turned off, leaving a silent channel.

You also need to think about the rights to play certain music in different environments, to avoid problems with the copyright owners is it always best to check that you have the permission to play each song or sound.

J
Johan is the author of this solution article.