Presets is a powerful feature of DISE and allows you to save objects and entire scenes to file, to later reuse in other presentations. You may have multiple scenes containing different content but with similar objects.

All objects in DISE Composer can be saved as presets. Presets maintain all the properties of the object, such as movements and effects.

You can save single objects or groups of objects as templates.

Start with a blank scene and create an object. Here I have selected to create a Text object with the text "DISE Preset Example".

To save this preset, go the Home tab in the top menu, and click on the Save as preset button. A save dialog will appear. We recommend that you browse to your DISEContent folder and save it in the Library > Presets > Objects > Text folder.

Note: You can of course save your preset anywhere or create your own folder in the DISEContent folder but if you want it to conveniently appear in the Library you need to save it in the location stated above.

When saving presets or template scenes a thumbnail image is automatically generated, so when you want to use your saved preset in your scene you just find the thumbnail in the File browser. 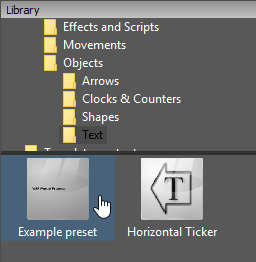 You can create presets that are a mix of objects and for exempel animations, and they will be saved together as one file.

Let's say that we've instead of saving an object want to be able to save the settings, movements etc. for the object for later use. DISE Composer already contains presets for movement and transitions, ready for you to drag and drop. These presets do not contain an actual object but instead allow you to drag and drop them onto an object in order for it to have the properties of the preset. 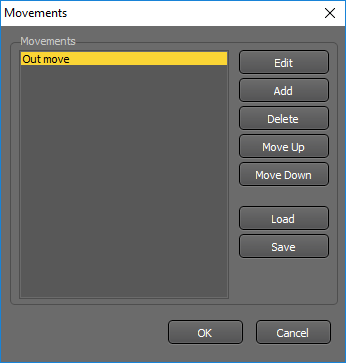 Path presets are created by opening the path context menu. To do so, go to the Home tab and select the Path tool. Then after creating a path, right-click on the editing area and select Save path. Load preset paths by selecting Load path from the same menu. The file extension for a path preset is .disepath.

Save and load effect presets in the Effects tab in the Object Properties by using the "Save" and "Open" icons. When saving an effect preset, all the effects in the list are included. The file extension for a effect preset is .diseeffects.

Scene presets are also referred to as external scenes. As previously mentioned, scenes may be added to and used when building DISE Movies and later imported into your presentation. They are saved to a .disescenefile. You can pre-define a number of scenes, let other people use the software to compose their own DISE Movies based on your template scenes and allowing them to change the text content on the scene without altering the overall layout.

To create your own scene preset just create your scene as you would like it to appear. ( Add images, texts, calendars and so on) Then go to Movie > Export > Scene. A save dialog appears. We recommend that you save it in your DISEContent > Presets > Scenes folder. (If you don't have this folder, then just create it)

Note: You can of course save your preset anywhere or create your own folder in the DISEContent folder but if you want it to conveniently appear in the Library you need to save it in the location stated above.