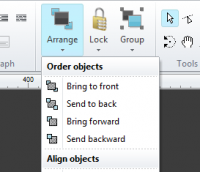 When objects overlap, you might want to decide which object should be on top of the other. There are four functions which helps you to do that. They are in order: Bring to front, Send to back, Bring forward and Send backward and can be found under the menu Arrange > (Order objects). The order of objects is shown in the timeline view below - the object furthest back is topmost in the timeline view.

Use Object as Background

DISE has a feature to automatically guess what the background in a scene is. An object is assumed to be the background if the object to the furthest back (the first object in the timeline) is expanded to exactly fit the screen and is locked. There is a quick function to make this on the menu Edit, or right-click > Use Object As Background. The function will place the object at the back, expand it to fit the screen and lock it.
The background is then also assumed to include all objects that are locked on top of the background until the first unlocked object. The background objects will remain behind other objects even if you use the Arrange > (Order objects) Send to back function. If you to use the background functionality, but you want all or parts of your background to be transparent, place a completely transparent square as the first object, expand it and lock it.